Part two in a series on DNA Damage and Cancer

We all enjoy a good paradox, something that is contradictory in nature but still holds truth and logic. Whether they are in math or philosophy and literature, paradoxes make us think outside of the box. An important paradox, or double edged sword, in biology is the role that Damaged DNA Repair pathways play in treating cancer. 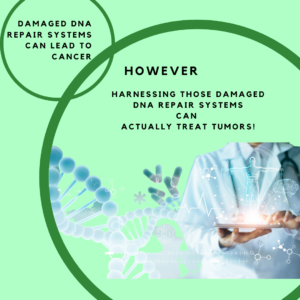 Most cancers have mutations in the p53 gene. This gene has also been termed the “guardian of the genome” or “tumor suppressor p53” because of its commanding role in many areas of cell survival including cell death, initiation of DNA repair and cell cycle arrest

Mutations in p53 and other associated genes, mean that cancer cells do not respond to cellular warning signs, like that they have accumulated too much DNA damage before progression to replication. 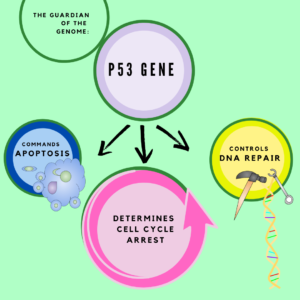 The common “plans of attack” of chemotherapies include the incorporation of  DNA alkylating/crosslinking agents, blocking DNA metabolic pathways and inducing radiation which cause DNA double stranded breaks. The mechanisms of these agents range from forming DNA adducts by adding alkyl groups onto specific DNA bases, to mimicking nucleotides and preventing DNA synthesis, resulting in cell death.

Common challenges and failures of current chemotherapies include off target 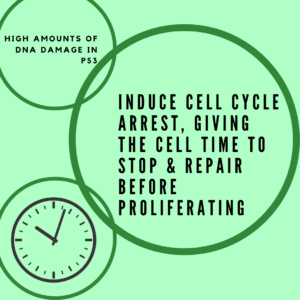 effects, which is as it sounds, the targeting of tissues or cells that are non cancerous, causing cytotoxicity to other parts of the body. Another failure is acquired drug resistance over time to these therapies due to a multitude of adaptive reasons.

Challenging these setbacks in current therapies, scientists have developed a superpower method of making sure only tumorigenic cells are targeted. This method is called synthetic lethality.

Synthetic lethality is the process of using a genetic weakness to target a specific pathway to kill a tumor. The most commonly used example of this utilizes the the inhibition of a DNA Damage Repair Complex called PARP 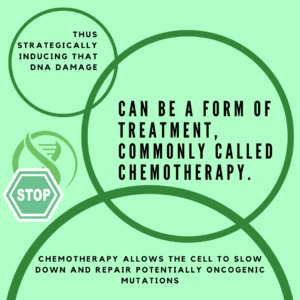 (Poly(ADP-Ribose) Polymerase 1) in conjunction with cancerous mutations. In breast cancer associated mutations BRCA1/2, mentioned in our past article on DNA Damage, Oncology & Angelina Jolie, synthetic lethality targets the repair dysfunction caused by these mutations. When PARP is inhibited, the tumorigenic cells fail to actually repair a simple damage and create more complex damage instead, which requires error free repair. However, because of the mutation in BRCA, the cell instead is forced to use error PRONE repair and the cell is thus too overwhelmed and cell death is induced. Scientists have proved synthetic lethality effective as a monotherapy and combined with classical chemotherapies.

Amelia Technologies we develop technologies that assess levels of DNA 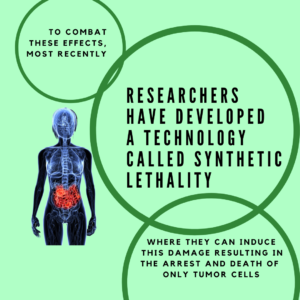 damage and cytotoxicity induced by chemotherapies, more efficiently and at a higher resolution than ever before, in order to develop better cancer therapies.

Amelia excels in the development and optimization of molecular diagnostics platforms that measure a range of endpoints associated with DNA damage and repair including general DNA maintenance processes.